Akothee is a great musician, or is she?

Well, personally I feel nothing for her music but love her personality, she’s quite the charmer. However, she has so many fans but it seems as if they are not feeling her music. She apparently spent KSH 4 million and got less than KSH 300,000 views. She shared with her fans that no matter how much money you spend the end product is what matters at the end of the day.

She wrote this after another musician posted about his misfortunes. 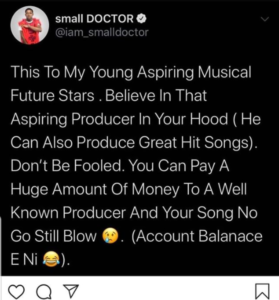 It’s rather obvious that Akothee’s main hustle is definitely not her music. The user urged ´believe in that aspiring producer in your hood, he can also produce great hit songs.´ Basically, if you’re going to venture in the music industry be ready to invest and get nothing in return.

But at the same time, if you’re a bad musician or musically challenged should you really invest in this industry though?

Also read,Singer Akothee Shows Her Dad Off On Social Media

We Didn’t Announce Any Winner, Asaase Radio Clears The Air On Soundclash

Y Pee Acquires Yet Another Benz, Poses With It In Latest Photo (+ Photos)