Determined Migori Orphan Reports To Form One With An Empty Box

He did not meet the requirements to get admitted to Kanga High School yesterday but the fear of losing the chance and a burning urge to learn saw him report to the institution nonetheless.

Geoffrey Omollo shocked the teachers when he showed up with an empty box and pleaded not to be sent back home.

Kanga is a highly sought-after school in the region and having secured a chance, he was not willing to let it go. Not even lack of money would stand on his way, he demonstrated. 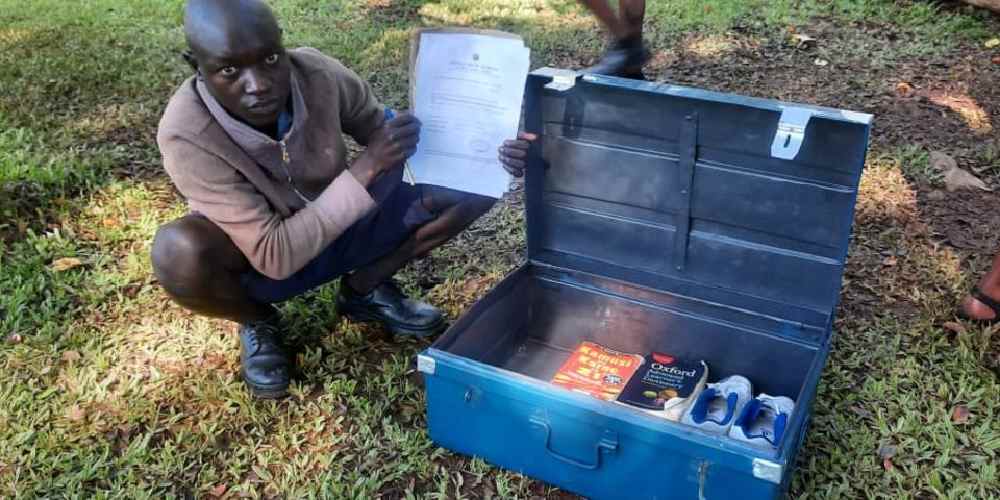 While other students trooped into the institution with shopping and other admission requirements, Omollo could only afford a dictionary, Kamusi and a pair of sports shoes-which had also seen better days but vowed that he’d only be dragged out of school as he was out to learn.

He also came unaccompanied since he is a total orphan.

As others were led by parents in long queues to be cleared, he was in the company of his metal box and made his way to the admission block, all along wondering how unfair the society was.

Teachers handling admission were lost for words upon learning that the new student who scored 387 marks in KCPE was a total orphan but determined to report to school at all costs.

“That’s all I could raise since I have no parent. Even the few books and shoes were donated to me by a neighbor whose son had completed high school, “he told Nation.

Geoffrey Omollo, form one student reports to Kanga High school with an empty box. He only had a pair of shoes, a dictionary and Kamusi, which were borrowed.

The neighbor also gave him money he used to purchase the box while a relative provided his fare to school.

“I’m not worried of my background as long as I get an opportunity to further my education,” he said.

Mrs Sabina Atieno, one of the parents who accompanied his son expressed concerns about the plight of the 15-year-old.

“He looks so determined despite his humble beginnings. I hope some may come to his aid and see him through school,” she said.

“as his school fee issue is looked into.”

He’s hoping a well-wisher will come through for the boy in good time.

“We will accommodate him and provide the necessary learning materials. Any well wishes who can come in handy will be of great help to this boy,” Mr Kodiango said.

Kanga High posted sterling performance in the 2021 KCSE in what saw it obtain more than 20 straight A’s.

At St Dalmas Primary School in Rongo Sub-County where Omollo learnt, teachers were upbeat that their top pupil get help with some concerned that it would be sad to see their product not achieving his dream due to poverty.

Mr Dominic Weda, the school head described Omollo as a

“brilliant and focused boy who can go places if given an opportunity”.