The Government of China, through its Embassy in Kenya, has insisted that it will continue to fly four more passenger planes from Guangzhou to Nairobi’s JKIA.

The Embassy issued the statement after a plane owned by the state-owned China Southern Airlines was involved in a dramatic standoff at the JKIA after some of the airport staff declined to allow the 239 passengers into the country.

The plane was nearly turned back to China before senior government officials intervened in the matter.

The Ministry of Health justified the decision to allow the Chinese to claim the passengers had been requested to self-quarantine.

“All 239 passengers were screened on board, cleared and advised to self-quarantine for the next 14 days,” said the Ministry of Health.

Amid public uproar, the Chinese embassy defended the decision to allow more of its nationals into the country at a time the Asian nation is struggling with the deadly and highly contagious coronavirus.

The Embassy said it would have weekly flights to Nairobi until March 25 – meaning there will be a total of four flights from Guangzhou to JKIA.

The Chinese Embassy further requested its citizens to self-quarantine by isolating themselves upon landing in Nairobi.

“The Embassy wishes to reiterate that 14-day self-quarantine is one of China’s epidemic prevention and control experiences and for the public health safety of Kenya which we all cherish,” the statement read in part.

Here is the full statement: 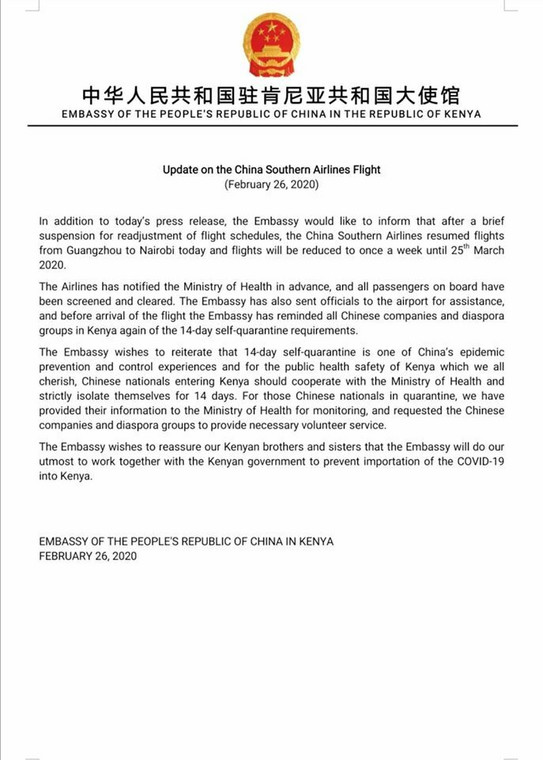 You can also read, Government Will Not Ban Chinese Flights, Says Coronavirus Can Come From Anywhere

Bald Men Around The World Are Now Rocking Wigs

Living In A Man’s House Is Not Proof Of Marriage, Court Says